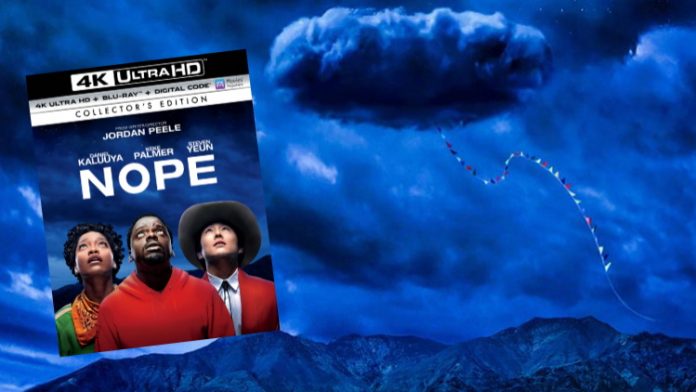 A brother (Daniel Kaluuya) and sister (Keke Palmer) discover a strange phenomena in the skies above their California ranch and set out to document it. Also stars Steven Yeun, Michael Wincott, and Brandon Perea. Written and directed by Jordan Peele.

Jordan Peele’s NOPE is a visual marvel and an entertaining journey around the fringes of paranoia and into the heart of otherworldly terror. Like so many classic monster movies, NOPE knows that what isn’t seen is often the most terrifying thing. Even though NOPE is an effects-laden film, it doesn’t rely on them to stir emotions and evoke a response. In an age of CGI spectacle, where every possible visual can be attempted, it’s a nice change of pace to deliver a story that doesn’t use special effects as a crutch.

However, Peele’s insistence on building an air of mystery is also its biggest fault. Narratively, he holds his cards to his chest far too long, and some viewers will lose patience, as the film seems to get needlessly sidetracked building atmosphere and establishing themes without advancing the narrative. The payoff in the third act is effective, but you’ll wonder what took Peele so long to get there.

NOPE follows the Haywoods, who train horses for the entertainment industry. The family patriarch Otis Sr. (Keith David) has died under mysterious circumstances in a freak occurrence at their California ranch. His no-nonsense son OJ (Kaluuya) has taken over the business, but he’s struggling to succeed in a changing industry. When he and his sister Emerald (Palmer) realize there’s a possible UFO in the sky over their ranch, they set out to record it on video. They enlist an employee from the local Fry’s Electronics (Perea) to get cameras set up around their ranch, and he’s immediately interested in joining their quest.

Unbeknownst to them, Ricky “Jupe” Park (Yeun), a former child star who owns a nearby western theme park, has also seen the thing in the sky. Both the Haywoods and Park are using the thing (nicknamed “Jean Jacket”) for their own purposes, which is a recurring theme in the film. Peele layers the story with metaphors to explore how human nature is inherently selfish, always seeking personal satisfaction by exploiting others.

In the film, a running subplot involves a monkey attack during the filming of a 1990s sitcom. It’s obvious Peele is using the subplot to reinforce his theme, but because it is presented so blatantly throughout the film, many viewers will assume it’s somehow connected to the mystery at the heart of the story. If viewers knew beforehand that it isn’t, and merely a metaphor for the story involving the Haywoods, they would actually enjoy it more.

The film reminds me a bit of Signs, M. Night Shyamalan’s slow burn sci-fi thriller that also teases the audience a bit too long, before unleashing a wild conclusion. That film is also highly divisive for many film fans, who feel it’s all hype and no payoff. I disagree, as both Signs and NOPE overcome slow pacing thanks to great visuals, some tense scenes, and a fantastic cast.

In the case of NOPE, Daniel Kaluuya’s understated, constantly-annoyed OJ is great fun to watch here. On the other end of the emotional spectrum is Keke Palmer’s Emerald, whose mouth manages to make every situation worse. The rest of the cast is quite good, particularly Michael Wincott as a cinematographer driven to capture the entity on film.

Jordan Peele does his best to out-Spielberg Spielberg, and he often does, mixing visuals and tension for some fantastic scenes. Unlike Close Encounters and Jaws, which are more visceral experiences, NOPE spends a lot of time wrapping its themes around the fear and paranoia at the heart of the film. It works best when the characters are encountering the entity, not reminiscing about the past or their traumatic experiences.

Nevertheless, NOPE succeeds despite its flaws because Peele knows when to dial up the horror, and the third act is great fun to watch. NOPE may not be a perfect film, but it is certainly one of the most entertaining I’ve seen this year.

The movie was shot with IMAX cameras, and as you might expect, the image is incredible, even on Blu-ray, I was impressed by the quality. I admit I have become spoiled by 4K, but I still found the Blu-ray to offer a superior image, and suspect the 4K presentation will be reference-level worthy, if it manages to improve upon the high definition transfer the Blu-ray offers. The image is almost too good: rather than employ a film effect seen in 24 FPS, the image often has a live video feel, usually seen in high-rate FPS, and the quality never disappoints.

In addition, the film shifts into multiple aspect ratios, and uses the IMAX aspect ratio for the more dramatic scenes. The transfers between aspect ratios are so flawless, you may not even notice it. If you can, I strongly suggest watching this on as big of a screen as you can: the detail and depth presented here is jaw-dropping.

Equally impressive is the Dolby Atmos soundtrack, which uses every single channel to provide an enveloping sound experience. The “encounter” scenes utilizes sound to provide an extra level of creepiness, and it is highly effective. Music and dialogue and perfectly centered and crystal clear. It’s a fantastic track.

• “Shadows: The Making Of NOPE” Documentary. This fantastic look behind the scenes includes interviews and lots of set footage, and is quite an interesting watch that reveals Jordan Peele’s approach to the film. It also shows the extraordinary effort of the on-location crew to create the effects behind the various “encounters.” Running Time: 56:05

• Deleted Scenes. Five unreleased scenes from the film are included. Most are snippets off of scenes that offer little to the film. The best scene to watch, however, is the original version of the chimp attack, featuring Terry Notary in his motion capture suit portraying Gordy. It’s fascinating to see how his performance was turned into a CGI chimp in the finished scene. The scenes included are: The Hiker (1:57), Mallory (1:10), The Offer (:42), Terry Attack (4:19), and Be Careful (1:31).

• “Call Him Jean Jacket” Featurette. This featurette explores the creation of the thing in the sky, nicknamed “Jean Jacket,” from first idea through concept and finally, how CGI was used to realize it in the finished film. The movie magic employed to create the various encounters are also shown. Running Time: 14:22

• “Mystery Man Of Muybridge” featurette. Eadweard Muybridge’s “The Horse in Motion” film clip is featured in the film, and this featurette explores the history behind the clip and how it was integrated into the film’s storyline. Running Time: 5:30

• Digital Copy. A code for a digital version of the film, redeemable through services including VUDU and Movies Anywhere, is included.

Click here to order NOPE on 4K, Blu-ray, DVD, and Digital from Amazon!