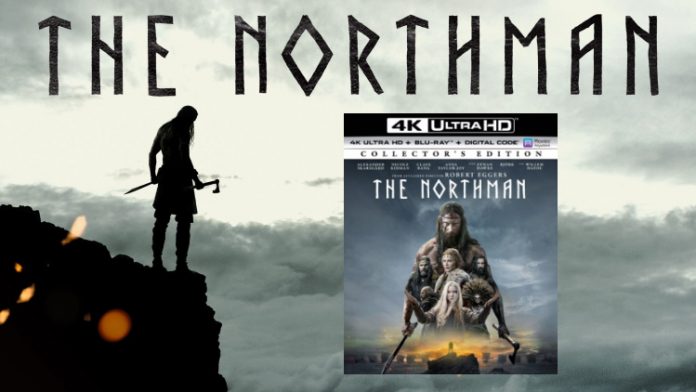 If you know Robert Eggers and his body of work, then you don’t need me to build up your expectations for The Northman. If you’re unfamiliar, just know that Eggers creates fantastic, slow-burn period pieces with stunning visuals. In The Lighthouse, he explored the human psyche driven to the breaking point by isolation. In The Witch, he crafted a new breed of psychological horror film, setting the devil himself loose on a Puritan family in the 1600s. For The Northman, Eggers explores the Viking legend that inspired Hamlet with a fair dose of Norse spirituality, which is responsible for many of the film’s most striking visuals. It also boasts an impressive cast, led by Alexander Skarsgård (True Blood), and it is quite unlike any movie you’ll see this year.

The film stars Alexander Skarsgård as Amleth, a Viking prince out for revenge against his uncle Fjölnir (Claes Bang, The Affair). After being away for decades, Amleth disguises himself as a slave to get close to Fjölnir. He falls in love with another slave, Olga (Anya Taylor-Joy), and their relationship is tested as Amleth’s plan to exact revenge escalates. He also realizes the life he lost was not the one he thought he had.

The Northman is no mere revenge tale: it is a tragedy, an exploration of the bond between fathers and sons, and a look into the Norse culture’s connection to the supernatural. Eggers blurs the line between reality and the surreal, which at times obstructs the narrative. Amleth’s fate is pre-determined, it seems, with the gods directing his path. However, if you’re expecting a more visceral tale, along the lines of Conan, Braveheart, or even Gladiator, where the quest for vengeance propels the story, you’ll be disappointed. The Northman is no less brutal, but far more introspective than those films. It isn’t trying to be a crowd-pleaser: it tells its story, regardless of the fact that American audiences will find most of the Viking perspective strange. Despite that, it’s also the main reason why the film overall is a fascinating watch.

The otherworldly imagery, intermingled throughout the film, drives this point home, but also creates an emotional detachment that not even the best actors can overcome. Regardless, the cast here is impressive. Alexander Skarsgård, in particular, is exceptional: he’s perfect in the role of Prince Amleth, a man defined by his vengeance. While the rest of the cast is quite good, they are almost too recognizable for their own good. Willem Dafoe still manages to disappear into a role, and Anya Taylor-Joy is still a fresh-enough face to play a Viking slave and still be believable. Nicole Kidman and Ethan Hawke, however, still look like movie stars in Viking cosplay. That’s not a criticism of their acting, they are both quite good, but regardless of the scene, you know you’re still seeing Kidman and Hawke, not Queen Gudrún and King Aurvandil.

Eggers’ approach to the film is an acquired taste to be sure, and he certainly makes The Northman a unique film with a definite vision. The story, however, is a bit formulaic, except where it’s laced with nods to Norse spirituality. It is a film of memorable moments, but they don’t quite gel into a completely memorable film overall. It’s worth a watch to be sure, and some of the images will stay with you, and for this film, that’ll have to be enough.

A film with stunning visuals like The Northman needs a great transfer, and Universal doesn’t disappoint. Despite most of the film featuring a dark, desaturated image, the detail is astonishing at times, thanks to a high bitrate. A subpar transfer betrays itself in dark scenes, where shadow and night turn into a pixelated, disappointing blotch. Not so here: every scene, thanks to its Dolby Vision mastering, shows every last bit of detail on your screen. It’s one of the best transfers I’ve seen this year – it’s absolutely superb.

Colors are used selectively, as so much of the film consists of shades of grey and black. It is even more stunning, then, when lush greens and crimson reds appear from the monochromatic palette. It’s a dramatic choice by Eggers, and makes the cinematography all the more fantastic.

The audio is a Dolby Atmos track, which sounded superb through my system, starting with the impressive low-end of volcano featured in the opening shot. There’s plenty of nuance throughout the channels and the music sounds fantastic. There are a number of scenes with overlapping dialogue, with conversations and screams often carrying on in the background.

The following features are available on Digital, 4K UHD, Blu-ray, and DVD.

• “An Ageless Epic” Featurette. Robert Eggers, Alexander Skarsgård, and members of the cast and crew discuss the Norse history and mythology featured in The Northman. The attention to detail in the sets and costumes is also explored. Running Time: 11:17

• “The Faces of Vikings” Featurette. The cast of film, as well as Robert Eggers, discuss the characters, their history, and their motivations. Running Time: 10:27

The following special features are available on Digital, 4K UHD, and Blu-ray. They are not available on the DVD.

• “Amleth’s Journey To Manhood” Featurette. The “initiation” scene between King Aurvandil and Amleth is explored, as the actors and Eggers discuss the Viking ritual into manhood. Running Time: 3:56

• “Shooting the Raid” Featurette. A behind-the-scenes look at how multiple production departments worked together to pull off the fantastic “raid” sequence. Running Time: 4:10

• “Knattleikr Game” Featurette. The little-known Norse game, which is featured in a pivotal scene, is explored. Running Time: 2:42

• “A Norse Landscape” Featurette. Most of The Northman was filmed in Northern Ireland, and this featurette explores the challenges the production endured during their location shooting. Running Time: 4:43

• Audio Commentary. Co-writer/director Robert Eggers provides an informative, engaging commentary, with lots of discussion on the effort taken to achieve historical accuracy, which is difficult considering just how little is known of the Viking culture from 1,000 years ago.

• Digital Copy. A code for a digital copy of the film, redeemable through Movies Anywhere and other services like VUDU and AppleTV/iTunes, is included.

Click here to order The Northman on 4K, Blu-ray, DVD or Digital from Amazon!