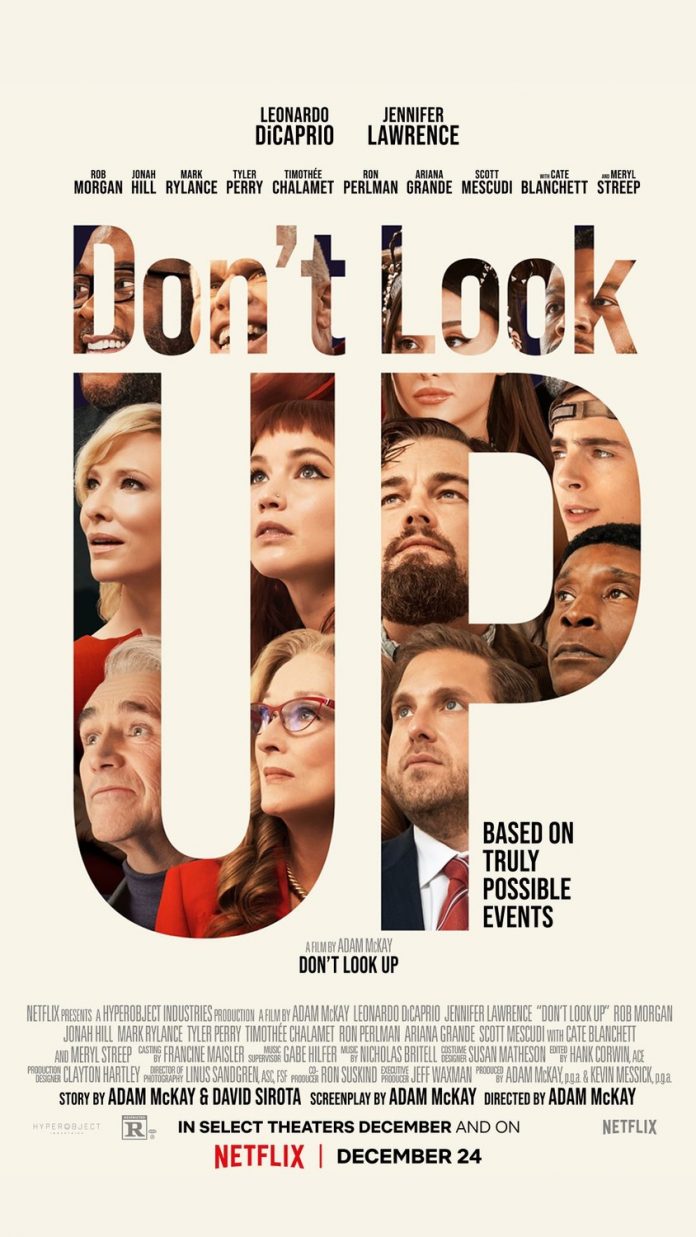 Don’t Look Up is a modern disaster movie satire with plenty of star power and comedic moments. However, it falls short of achieving its goals and makes some questionable decisions given the topic.

Adam McKay’s film career has progressed from improv-laced comedies to using comedic or tongue-in-cheek imagery to discuss real world contemporary issues. Don’t Look Up is the next evolution of his unique approach to film. This film trades in real issues for something more fictional. But its really only the actual story/characters that have become fictional because the themes and atmosphere are very real.

Don’t Look Up is a film that essentially makes fun of our current social and political environment. It thrusts humanity into a situation where our doom is imminent, and yet we can’t quite pull it together to save ourselves. Some of this happens to be because we have different views of what should be done. Some of it has to do with the deep political divide in the US which prevents progress on any large scale issues. And some of our inability to function is based on greed, and the fact that the people in power only want what’s best for them, personally.

The ability for the film to frame the challenges of our world today in a satirical, if entertaining fashion is both the film’s best and worst attribute. On one hand the issues the film brings up are fairly obvious ones, and as a result the film’s fictional take on them is not very surprising. In fact, you could call it depressing. The world depicted in Don’t Look Up is a farce, but its just a shade away from our own. That makes Don’t Look Up a tragedy, not a comedy.

When I think of classic tragedies I think of films and stories that use terrible circumstances to educate and inspire us. Don’t Look Up has nothing new or compelling to help us combat these issues we live through on a daily basis. It makes a half-hearted attempt at telling us how we should be happy with what we have. That we should be kinder to each other, but at the same time it essentially argues how we can’t really trust anyone else, especially if they are in a position of power. It makes those we look up to seem incompetent and self-serving (and incidentally makes the title very fitting).

In fact, you could argue that its approach makes things worse, not better. By essentially giving a very biting view of current events, it makes fun of a large portion of the population. It makes assumptions about them that are believed by the other part of the population. In other words, Don’t Look Up is not going to convince people of opposing viewpoints to consider other perspectives on current events. It’s just going to further entrench them in their own paths. In fact, I’m not really sure what the point of the film is besides giving a who’s-who of Hollywood A-stars an opportunity to call out their political opponents for their behavior.

The film opens when astronomers Dr. Randall Mindy (Leonardo DiCaprio) and Kate Dibiasky (Jennifer Lawrence) discover a comet that will strike the planet in six months, leading to planet-wide extinction. They try to take this discovery to the government, but president Janie Orleen (Meryl Streep) doesn’t take them seriously, and neither does the media when they try other tactics. But when the president becomes involved in a scandal, she tries to deflect the media attention with the news of the comet. A mission is developed with NASA to try and save the planet, but when it gets taken over by a powerful campaign donor and tech company mogul, the future of humanity is put in doubt.

All of the star power in this film makes it feel like a classic screwball comedy from the golden age of Hollywood which would feature a bunch of big-name stars coming together looking to have a good time. While Don’t Look Up has its fair share of comedic moments, the type of comedy on display is very dark within the context of the events it depicts. Ultimately the film has a depressing tone as well, so the comedy is not exactly something that makes the film effortlessly enjoyable, although it can be entertaining.

But despite the criticism I have regarding the filmmakers’ approach, I do feel like the film sticks with you. The writing certainly does not lack in its wit or delivery, and overall it does a good job to give all of the films’ stars a moment or two to shine. Many of the characters feel like caricatures of real people, with all of their faults amplified for entertainment’s sake. It doesn’t provide for very much depth in those characters, but their excesses are memorable against all of the paranoia and chaos.

Against those living cartoons the film’s two main characters are remarkably, and interestingly grounded. It isn’t very often we see a film with this level of stars where the lead actors are just trying to portray normal everyday people dealing with the unimaginable. Leonard DiCaprio’s character becomes a sort of hero by accident, not because of any special qualities but because he is simply in the right place at the right time. Jennifer Lawrence’s character is in the same situation. They aren’t extraordinary people by any means, and struggle to figure out what they should be doing. I especially enjoyed DiCaprio’s performance in the way his character struggles with his anxiety along the way. Both of them speak to the frustration we all feel when we see people acting in a manner which is contrary to what we believe is common sense.

The aspect of normal people having to deal with all of these delusional personalities in the face of certain death does deliver some of the film’s few poignant moments. It speaks about the ways we often (fail to) deal with the difficulties of reality. Placing blame on others, ignoring the truth, or even you know better than the experts. It also makes an argument about how our world is essentially run by celebrities. The government and media is only willing to do something if it helps their image or agenda. But again, these are things we kind of already knew. The film isn’t necessarily pointing this out, but instead is kind of playing through a scenario to show us how our society has dug its own grave.

Which is what brings me to discuss how the film fails to clear its biggest hurdle. At its heart the film is a message about global warming and how we need to come together as a species to combat this issue. Its a message that is important and needs more support from those in positions of power. But Hollywood is probably not one of those positions. No matter how important celebrities think they may be in changing public opinion, I fail to see how a multi-$100 million movie is going to move the needle.