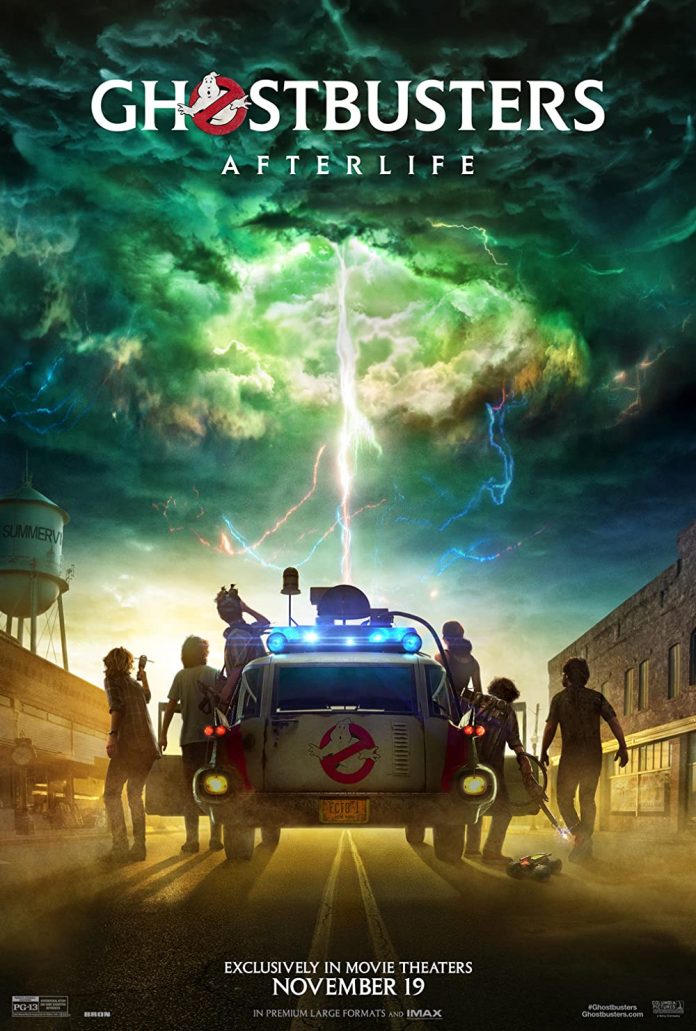 After getting pushed back for over a year we finally get the next chapter in the original Ghostbusters universe – Ghostbusters: Afterlife! Callie (Carrie Coon) and her two kids, Trevor (Finn Wolfhard) and Phoebe (McKenna Grace) arrive in a small town after learning about her estranged father’s passing. They soon begin to discover their connection to the original Ghostbusters and the secret legacy their grandfather left behind.

Well, it’s been about 37 years since the Ghostbusters made their way to the theaters. Ivan Reitman directed that movie and it was written by Dan Ackroyd and Harold Ramis. Now all these years later Jason Rietman takes the reins to continue the franchise his dad helped bring to life. If you’re an actual Ghostbuster fan, within the first 20 minutes, you will already know who Callies’ dad is. The home is filled with various books, maps, gizmos and gadgets, and of course the Ecto-1 sitting in the barn. For a man who proclaimed that print was dead, he sure kept a lot of books all over the place.

Based on the 1984 film “Ghostbusters”
An Ivan Reitman film written byDan Aykroyd and Harold Ramis
Produced by: Ivan Reitman

Now the film is not chock full of ghost busting, and you won’t be laughing like crazy as you did with the original movie. But it kinda makes sense since most of the original cast were from the sketch comedy shows, Saturday Night Live or SCTV. So how do they capture the feel of Ghostbusters, with lots and lots of nostalgic easter eggs. Just about every scene Reitman shot there was some kind of throwback to the very first film. Whether it’s just a picture, a place, a name, even those cute mini staypuft marshmallow men. Even most of the history of events and lore was from the first film and only the first film, I don’t blame ’em though GB2 was not the greatest.

The other major part of the movie was McKenna Grace. Yeah, we have lots of talented people in the movie who have much more experience, but McKenna picked this thing up strapped it to her back, and carried this film like a trooper! her character Phoebe is a classic loner, who feels more comfortable with science than with people. Most of the hilarious moments in the film come from her or when she shares the screen with her new and only friend Podcast (Logan Kim) “because he has a podcast” or her scenes with Paul Rudd.

I kinda expected more of a “passing of the torch” for an all-new team of ghostbusters, but the movie was more a young girl and her family learning about who the Ghostbusters are and what they did. Much like the son continuing the movie that his father did so many years before, it’s about connecting the old generation of GB fans with the new. Ghostbusters Afterlife is a great story and the end might make you shed a tear or two, but not me (that’s my story and I’m sticking to it).

I should probably also mention that you should stick around when the movie ends since there’s a mid-credit and end credit scene in the movie. Well, what are you waiting for go check out Ghostbusters: Afterlife.