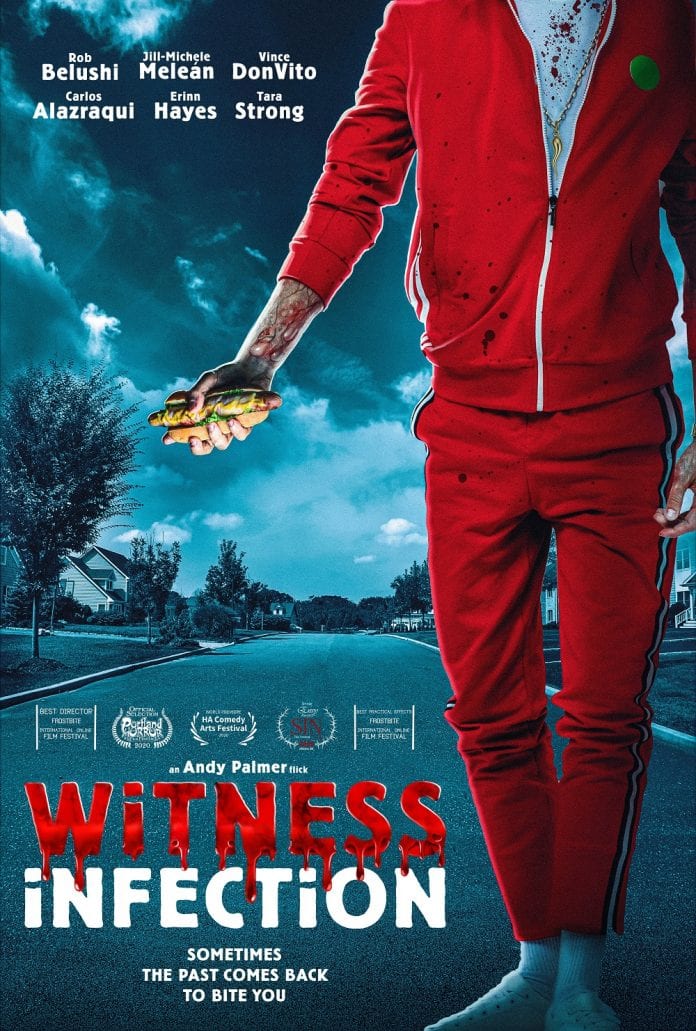 ReviewI have to admit when I first saw the poster for this movie I kinda rolled my eyes. A horror-comedy movie about mob families caught in the middle of a zombie outbreak … that just sounded ridiculous to me. Well I can tell you, yes it’s 100% ridiculous and that’s why I loved it.

Witness Infection is directed by Andy Palmer and co-written and produced by Carlos Alazraqui (“Reno 911”, “Roko’s Modern Life”, “The Fairly Odd-Parents”) & Jill-Michele Melean (“MADtv”, “Reno 911”, White/Latina standup special) who both also star in the film tells the story of two rival mob families who are transferred from the Witness Protection Program to the same city by mistake. Life has always been pretty protected for Carlo Serrelli (Robert Belushi). But his past is about to come back and bite him. Carlo’s father (Alazraqui) has kept him out of the deadly mob business by giving him a job at the family dog groomers, while his younger brother, Dominic (Bret Ernst), has always done the dirty work.

All that is coming to an end as Carlo’s father has to force him into an arranged marriage with Patricia Miola (Erinn Hayes), daughter of the rival Miola family boss. Carlo’s two best friends, Gina (Melean) and Vince (Vince Donvito), vow to help him get out of this predicament, but they all get in way over their heads when a serious infection starts eating the town. The good news is that Carlo may not have to get married after all — but the bad news is that everyone might die. Witness Infection is a pretty campy comedy horror flick that really comes across as more silly than actually funny and honestly, there are R.L. Stine movies/tv shows that have more frights than anything in this film. So if you’re coming into this expecting a walking dead gorefest or to be rolling on the floor laughing from start to finish you may be disappointed. Now I’m not saying the movie is horrible either, I actually enjoyed it but I also knew what I was getting into. There are scenes that make things worthwhile such as the family dinner, the meeting with Mr. Milola (Maurice LaMarche) about the wedding, and the bar scene where we meet Rose (Monique Coleman) who will NOT be the person of color to die first. Witness Infection will be available on March 30th on Amazon, iTunes, Google Play, YouTube Movies, Cable, and Satellite On Demand with a runtime of 82 minutes.