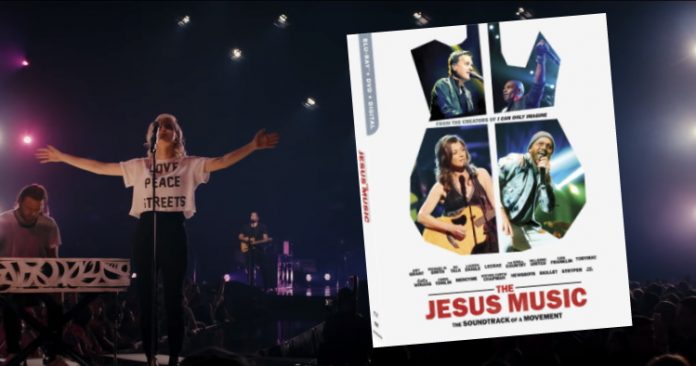 The history of contemporary Christian music, dating back to its origins in the “Jesus Movement” of the 1960s, is chronicled in this documentary. Features interviews with Michael W. Smith, Amy Grant, Kirk Franklin, TobyMac and Michael Sweet. Directed by The Erwin Brothers.

Gospel music, better known as Contemporary Christian Music (CCM), may be a mainstream music genre today, but few are aware of the journey it took from the pulpit to radio to Spotify. The Jesus Music documents this history through a series of interviews with the people who were there – from artists to producers to magazine editors.

I’m a sucker for good documentaries, and directors the Erwin Brothers (I Can Only Imagine, the upcoming American Underdog) have crafted an insightful and informative film that will entertain viewers even if they aren’t fans of the genre.

Featuring a nice balance of contemporary interviews and vintage material (including photos, concert footage, and music videos), The Jesus Music focuses on a handful of the most influential artists in the genre which most will recognize: Amy Grant, Michael W. Smith, Michael Sweet of Stryper, TobyMac of DC Talk, and Kirk Franklin. Each not only discusses their experiences in the industry, they open up about their struggles balancing their personal and professional lives. In addition, the added pressure of being spiritual role-models weighed heavily on many of them, and the documentary doesn’t shy away from the subject.

You might be surprised to learn that Contemporary Christian Music originated from the hippie counter-culture of the late 1960s and 70s. After the deaths of leaders Martin Luther King and Robert Kennedy and artists Jimi Hendrix, Janis Joplin and Jim Morrison, many turned to spirituality. In southern California, the Jesus Movement emerged from these born-again hippies, and the music it spawned has become its own industry that spans multiple genres.

The CCM movement had so many important artists who have made an impact across multiple decades, it’s nearly impossible to cover them all in one film. Even though the film clocks in at just under two hours, it still feels like the filmmakers only scratched the surface – a lot of the interviewees get less than a minute of screen time. The directors smartly keep the focus on a handful of trailblazer artists. In an effort to connect many of the various storylines, John Styll, the founder CCM Magazine, is often relied on to fill in the historical gaps and connect the dots, creating a more focused narrative and a more satisfying film overall.

With lots of vintage footage intercut with new interviews that put everything in perspective, the film pulls no punches that there was always a battle to balance faith, ministry, fame and money. This isn’t a patronizing pat-on-the-back to those featured: there are very sober, very human stories told here, without the cinematic saccharine to make it all seem like it turns out OK in the end. And yet, it is ultimately a film with a story filled with hope.

The Jesus Music manages to do what CCM music has done for decades: crossover and take the Gospel to the masses. If you’re a fan of CCM, the movie is a nostalgia trip with lots of insight you’ve likely never heard. If you aren’t, the film features a fascinating story told earnestly: it’s one of the best documentaries I’ve seen this year.

The Blu-ray transfer sports a sharp video image, at least with the contemporary interviews that were conducted for the film. Colors are deep and true, with nice sharpness. However, a significant amount of vintage material is featured, and the quality of the material varies wildly. While videotape from the 1980s lacks a lot of detail, it serves the look and style of the film when it contrasts with new footage recorded on digital cameras. I can’t discount the film because the vintage source material is lacking in quality, but rather I would focus on how the filmmakers embrace it as part of the viewing experience.

The audio, however, isn’t weighed down by quality limitations – the music that is featured sounds fantastic in a 5.1 DTS HDMA sound mix. The bass often rattled my speakers, and I only wished the music was featured more.

The only truly disappointing thing about The Jesus Music Blu-ray is the lack of bonus features. At the very least, it should have been a no-brainer to include the complete music videos and vintage clips sampled in the documentary. It was my immediate thought upon watching it – I wanted to hear the entire song or video they featured only a snippet of. I would assume they had the proper permission to feature them, so seeing them in their entirety would have been a plus.

Instead, we get a single lyric video of a new song by Michael W. Smith. That’s it.

Surely the record labels involved would have loved to have their artists featured more in-depth in the bonus features, and the disc suffers for it. A documentary should ALWAYS have supporting material included on a Blu-ray.

The special features included in the disc are as follows:

Click here to order The Jesus Music on Blu-ray from Amazon!