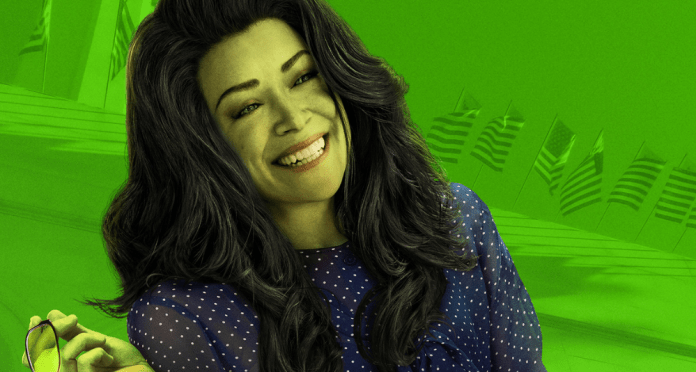 Jennifer Walters makes her debut in the MCU with style. But before she smashes her way through the fourth wall and back onto our screens this week, let’s discuss the show’s premiere episode and what we can expect as it continues.

She-Hulk is a show thoroughly entrenched in the MCU without feeling self-referential or so isolated it could be separate property. It strikes a brilliant balance between having fun in Marvel’s massive sandbox but still staying character focused enough to not feel reliant on the franchise.

What will land for many viewers immediately after watching She-Hulk is how built for TV it clearly is. While there are clear plot threads that will return through the show—and Jennifer will have her own arc through the series—it’s evident this won’t be the same large-scale overarching narrative every other series has done.

It’s quite a refreshing change and gives a more exciting dynamic to MCU shows, where most of the previous series aimed for cutting a big movie down into parts. Structuring a show like a show is a weird thing to only be seeing NOW, but nonetheless, it’s an exciting prospect for upcoming projects.

The humor of the show feels fairly unique from the usual quips. There’s a lot more situational humor compared to characters being constantly jokey. Walters’s fourth-wall-breaking abilities are a lot of fun. While the comparisons to Deadpool might be the most obvious ones to make, the humor is entirely different. With the lead taking the narrative position of self-aware control of the show. “Lawyer show” was one of my favorite lines. The idea that Jen’s insistence on not being a superhero extends to her attempted control of the show is brilliant.

Tatiana Maslany absolutely kills it as the Hulking attorney at law, with a charm that immediately endears you to her. Her confidence, struggle and ability to cope with the big changes in her life are all balanced really well and Maslany sells it all. Tackling her ability to control her powers so much better than Bruce through the lens of her own experiences as a woman was a brilliant method to differentiate and flesh out the character while grounding it in relevant themes.

Much like a lot of Phase 4, She-Hulk isn’t afraid to have moments of sincerity and real commentary. It’s still very refreshing and makes stories entirely more compelling when they’re willing to address very real issues. While the dark corners of social media are filled with butthurt men who call facts “woke”. The biggest franchise in the world using its platform to give more awareness to the casual sexism that is still ingrained in society is an objectively good thing.

She-Hulk: Attorney at Law is a brilliant example of how Marvel doesn’t need to make every show a massive overarching narrative with one vision in mind. Threads can be present throughout the show but having episodic adventures that focus more on the evolution of a character than the big event is refreshing.

As the show continues we’ll see Jen meet the likes of Wong, Abomination and Daredevil while tackling a new job and dating in her 30s. We’re covering a lot of ground and that’s what’s great about the structure of this show. Each episode can have a particular focus without having to build up the big bad.

She-Hulk is a brilliant look at a woman’s experience through the lens of the Marvel Universe, and I am stoked to be along for the ride.