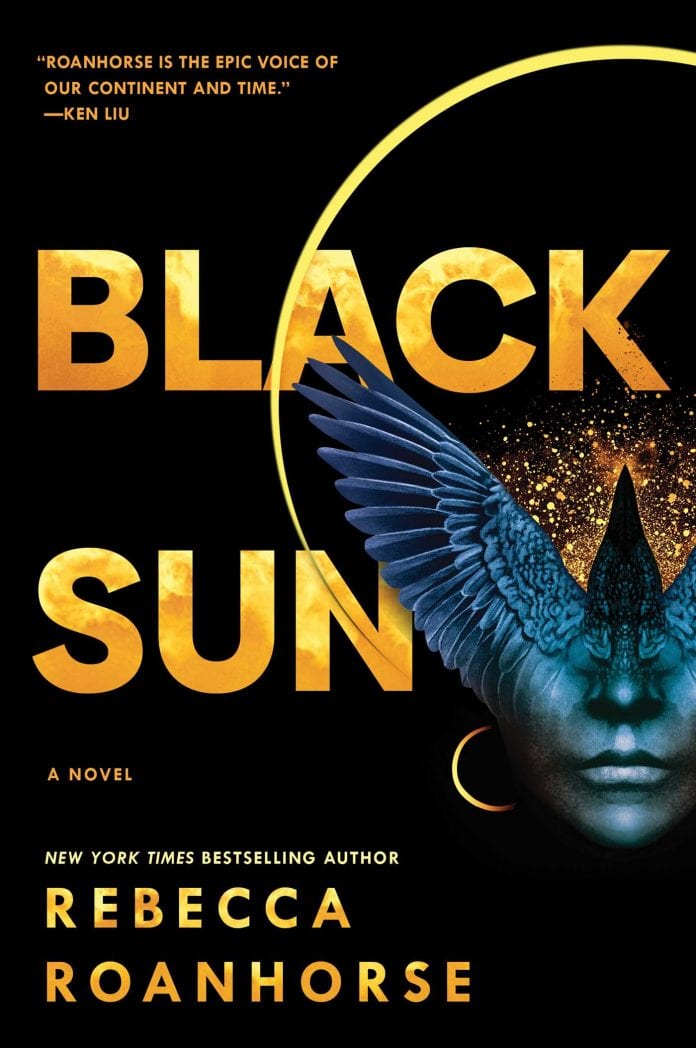 In Rebecca’s own words, Black Sun is inspired by a pre-Columbian/American melting pot, slightly restructuring indigenous societies and maps to create a story that is surprisingly relevant in its political message. Fear, anxiety, betrayal, demagoguery, political and religious dogmatism, all draped in a stunningly prophetic and violent world vision. It’s important to note, this is not a historical retelling, but rather a perfect example of to how craft germane high fantasy from real, but sadly eradicated time and places. Quick note, make sure you read Rebecca’s notes at the end where she talks about the many indigenous cultures’ customs/traditions pre-conquest, she drew upon for inspiration!

From the opening pages you’ll realize you’re in for something a little different than the usual fantasy yarn. Avid readers will no doubt recognize some of the high concepts on display, but at its core, Rebecca is concerned with examining the wounded spirit. Author Justina Ireland has a great line concerning high fantasy that goes like this…

“What makes fantasy great is the mirror it can hold up to humanity, the way it can reflect back our own fears and feelings…”

This perfectly encapsulates what Black Sun is all about, its themes, its promises, and its execution.

This first book in the Between Earth and Sky trilogy focuses on four characters, three of them carrying most of the load, Serapio the man god, Xiala the Teek sailor, Naranpa the Sun Priest, and Okoa the clan leader. An extreme oversimplification of their make and model but understand that each of them are direct in their intentions and live by a set of rules that, in the abstract, conflict with an ever-changing society. Basically, in a land of misfit toys where strict adherence to the creator’s laws is expected, these four are some of the least conforming. They all eventually converge on the holy city of Tova, where, as the summary states, on the day of the black sun, the very balance of the world tilts and events are put in motion that cannot be undone.

There’s a wonderful political slant to this story which shows off those sides of humanity that accompany these types of scenarios. Fear, greed, wanton acts of terror, xenophobia, and classism, all rear their ugly heads in mostly vehement ways. In brainiac terms, the right amygdala’s in most of the ruling bodies here are the size of a small 4-door, it’s nature, nurture, environment on steroids.

This strife, which is tearing at the fabric of society, rachets up the tension as Tova becomes more or less a powder keg, waiting to be lit. The four dominant clans, Carrion Crow, Water Strider, Golden Eagle and Winged Serpent, who also represent the majority and the downtrodden, are ready to light the match after years of oppression from the priesthood who’s convinced them to be afraid of the sun.

A lot of the action scenes, which are mostly short bursts of energy, are really more information delivery machines than anything else. They’re prophetic, so that each time we learn a little bit more about the MC’s, not just what they can do, but who they are. Rebecca uses violence with a purpose, it’s graphic, even blood-curdling at times, but it’s never exploitive. It’s kinetic but always under control, even when you get to the freaky stuff like countless murders of crows tearing out eyeballs. But what she’s really doing is peppering you up for an ending that is in many ways very much out of control, but that’s the point.

Because the concentric nature of the book delivers a violently jaw dropping climax you won’t soon forget, as that powder keg I mentioned goes off. Rebecca grabs the “To be continued…” idea at both ends, bending it to within an inch of its life, but never breaking. As the scene(s) fade to black you won’t consider even for a moment that this isn’t the perfect cliffhanger ending. It’s cinematic, enigmatic, powerful, emotional, and completely leaves you out of breath. Genius.

Of the four, the standout for me in this first chapter is the Sun Priest Naranpa, who at first glance, has some blank spots on left to fill on her character sheet. She doesn’t hold a candle to the others as far as mysticism, supernatural abilities, or physicality are concerned, she has none. And despite rising to the highest rank of religious authority in Tova, she faces bigotry and instances of preconception from all sides because she has no proper birthright.

Holding on to power in the celestial tower is a daily struggle as those around her, even her closest allies, would love nothing more than to see her removed, quietly if possible, forcibly just as well. She’s a radical, perceived as a miscreant, choosing to ignore the tenets which places her order above all else, looking to make the priesthood more accessible to their subjects. She’s mostly inadequate when it comes to her own self-defense, detrimentally quiet, and prone to the occasional emotional whim.

BUT, what Naranpa lacks in strength and dexterity, she more than makes up for with constitution and intelligence. And despite all of these calamities that I mentioned, she possesses the one attribute she needs most, courage, the will to act. She believes in what she’s doing, and she’s willing to go great lengths and suffer tremendous discomfort to accomplish her mission, and that includes dying. She’s already earned a life worth living, could have easily “played ball”, but when backed into a corner she chose to fight her way out it…that’s called integrity.

She has a survivor’s instinct, and she’s no dummy either, displaying a high level of astuteness and resourcefulness, having had to scratch and claw her way to the top. She’s thoughtful, seeks knowledge, peace, and understanding, and is perhaps the most empathetic of the bunch. By the end of this first chapter she’s risked everything, suffered impressively, and is poised for greatness. Her predicament at the end of this book is the most harrowing and fascinating of the bunch, part of which involves reconnecting with her brother Denaochi, an incredible character in his own right. In short, she’s fucking fantastic.

And this is to take nothing away from the rest, who are all intriguing in their own way and could all single-handedly carry a story. Okoa is the clan leader of the Carrion Crow, a former dominant, tough as nails group who still seeks retribution for the “Night of Knives”, a famous skirmish that gave the Sun Gods dominance over the clans. We know the least about him but it’s clear by the end that his role in this story will only become more important. If there’s honor to be found among the men in this tale, look for it here.

Teek sailor Xiala, who displays a derisive and single-minded approach to most things, is your lovable proxy rogue. In the patriarchal world of seafaring, she’s either being treated with a certain degree of irreverence (she’s part mermaid), or is on the receiving end of micro-aggressive chauvinism. It’s a hard knock life she’s chosen for herself, but the past has forced her hand in many ways. And as a Teek with supernatural abilities, she’s simply playing the hand that’s been dealt. That is, until she’s hired to get transport a man named Serapio to Tova in time for the eclipse.

As for Serapio, get ready for this guy and the less you know about him going in the better. He fills the “chosen one” role but in a more appropriate way, with Rebecca leaning towards the more self-reflective “touched by god” allegory. It’s his and Xiala’s story/relationship that provides us with the most fantastical elements including mermaids, giant birds/insects, gods, and some serious crow mythology. There’s also an atypical romantic subplot to their story that I found more contemplative than anything else, speaking to the needs of humans to reach out in the dark and feel something, feel anything. Serapio’s parts of the story, which include heavy doses of flashbacks, are the most visceral and brutal including some training sequences that will make you go back and hug your favorite teachers. Yes, his world has been one of violence, anguish, and emotional detachment, all with a singular purpose, and one that he doesn’t ever question.

This book is filled to the brim with characters beyond these that are both fascinating and wide-ranging, which brings me to another aspect of this book which I loved. Rebecca scores very high in the area of representation, and the reason she scores so well is because she does it with a sort of casual indifference, and while that may sound like a slight, it’s far from it. Paying homage to societies and cultures that dealt with certain aspects of gender identity, intersectionality, and sexual orientation with much more ease than we do, Rebecca’s understanding in these areas is understated, rational, and thoughtful.

Additionally, her delicate, shrewd, and studied handling of disabilities, namely blindness, their physical limitations (and advantages), and the prejudice they face in a harsh world carry’s equal weight. Exploring representation can be full of snares and tokenism, and straight white men have messed it up enough, but she avoids all those pitfalls with a masterstroke of prose, thoughtfulness, and intelligence.

As much as I’ve rambled on, I’ve only scratched the surface here. Black Sun is dense and unyielding, but it reads like a dream so a shoutout to editor Joe Monti and the team at Saga Press. Using unmatched world building, a rich mythology, magic inspired by the elements, and gregarious character work, this first of three books sets the stage better than most. If the opening scene represented the best this book had to offer, it alone would be the worth the price of admission, fortunately for us, it’s just the appetizer. Rebecca has indeed written an epic all-time fantasy with all the scope and scale one could muster.

Yes, Black Sun will leave you with a hunger you haven’t felt for quite some time.