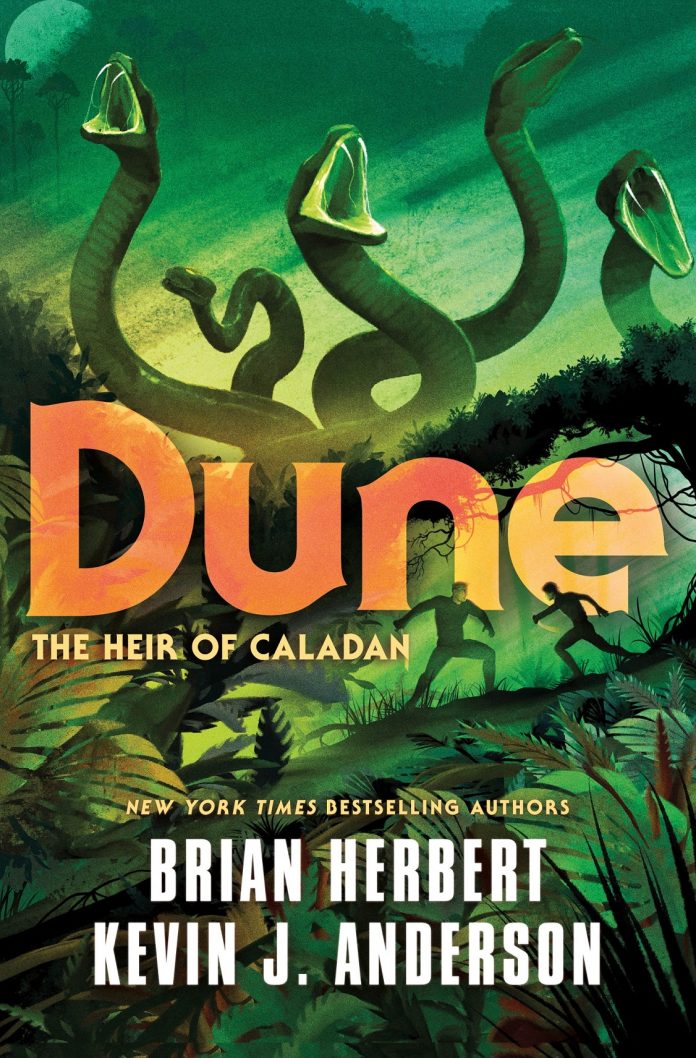 This week brings the final book in The Caladan Trilogy, closing out this Dune adventure in a fulfilling, but still odd, way.

Over the past couple years, Brian Herbert and Kevin J. Anderson have returned fans to the universe of Dune with an all new trilogy of novels known as The Caladan Trilogy. Set prior to the events of the original novel, The Duke of Caladan and The Lady of Caladan wove an all new story filled with the intrigue and politics fans have come to expect.

For the most part, I really enjoyed the previous two books and think they managed to solve some of the problems I’ve had with this duo’s Dune novels in the past. Sure there were some minor quibbles, but those first two books were much tighter in its pacing and storytelling, keeping me hooked even as those issues (I’ll discuss in a bit) niggled at the back of my mind.

So it’s all the more frustrating to see Heir of Caladan, the finale, toss out a big chunk of those improvements and revert back to old habits…

Closing Out The Story

The Heir of Caladan picks up the story right after the events of The Lady of Caladan. As the title implies, this time around, the primary focus of the story is on young Paul Atreides. His mother is off planet, forced into a new assignment by the Bene Gesserit, and his father finds himself deep undercover in the midst of Jaxson Aru’s rebellion against the Emperor. That leaves Paul to attend to the needs of Caladan in their absence; a heavy task that brings it’s own problems.

Even though a big focal point of the novel is on Paul and how he deals with the weight of Ducal duties on his own, the book has to wrap up the (many) divergent plot threads introduced. Among these are:

* Closing out Jaxson’s rebellion.
* Wrapping that rebellion up without Duke Leto getting in trouble.
* Getting Jessica back to House Atreides.
* Rescuing Gurney Halleck from the clutches/tortures of Rabban and House Harkonnen.
* Getting rid of the “Caladan Drug” once and for all.
* Wrapping up Baron Harkonnen’s spice smuggling plot as he’s investigated by Count Fenring.

As you can see, there’s quite a bit. And somehow, Heir manages to add in even more of its own minor subplots to the mix that have to be deal with as well. I get it, the final novel in any trilogy is there to wrap everything up, but the sheer amount of things happening feels like too much for this book to handle.

While I feel the book, generally, does a decent job closing all of the dangling point points, the problem is none of it feels as important as it should. Mostly because it doesn’t feel like there was enough setup in the previous books for things to be paid off. I’m trying to avoid spoilers, so I’ll keep this vague…There’s a major new factor with Jaxson and his rebellion. Like, a devastating “final weapon” he can use to bring civilization to its knees as a fail-safe option in the event his main plans go south.

In and of itself, this isn’t a bad thing. It actually makes quite a bit of sense, especially with how much of an extremist Jaxson has been portrayed in these books. The problem is Heir is the first time we’re hearing about it. It’s a central plot point and apparently he’s had it even BEFORE the events of the first book in this series.

So why was it never mentioned before? Instead of planting the seeds of this final weapon throughout the other two books, Heir of Caladan takes up quite a bit of space explaining it (via both flashbacks and general exposition). It’s frustrating, especially when you consider some of the random plot threads introduced—and dealt with—in the previous books.

The Lady of Caladan featured a strange aside about Feyd-Rautha getting a pair of genetically engineered hounds (very deadly). He gets them, is excited, and ends up killing them out of necessity all within the same book. Aside from fleshing out the page count a bit, it felt unnecessary. I mean, it’s not like Feyd himself learned anything from the experience, and it’s given only a brief passing mention in this book.

Heir of Caladan features a couple such random plot threads. One deals with a special breed of horse, while another deals with a puppy-love infatuation for Paul that not only felt out of place, but entirely forced. When you think about these aspects, it makes one (me) wonder why the IMPORTANT plot points, like Jaxson’s device, weren’t expanded upon instead.

The problem is a familiar one. In an effort to make the stories feel more complicated and filled with the intrigue/machinations fans come to expect, the authors bring together multiple plot threads. It’s something a few of their previous books suffered from (some do it very well), but honestly it felt like they had learned that lesson with the Caladan Trilogy.

While I had some niggling issues with Duke and Lady, I enjoyed their more straightforward nature and how they didn’t feel nearly as bloated as other Dune novels. Here, with Heir, however, they’re back to old habits.

Instead of recreating the feel of Dune‘s intricate plans-within-plans approach, the result is NO particular plot line feels as important as it should. It completely robs key moments from any emotional impact. At one point, this book has to wrap up a dangling assassin plot from the previous novel; one that was fairly significant. There are a few early chapters of set up, then it’s almost entirely ignored until the last couple chapters; at which point it’s summarily dealt with and feels like little more than an after thought.

While the action pieces are good (something this duo has always excelled at), the book struggles to make you CARE about them on any emotional level. When major characters die, it just sort of…happens and things immediately move on. A couple times I honestly didn’t even believe a character was dead because it was handled so flippantly.

While I sound fairly harsh here, there are several things I enjoyed about the book. Overall, I think the Caladan Trilogy is still among this pair’s better Dune stories. That’s why it’s so frustrating to see the finale fumble where it does.

The biggest problem, however, has been consistent throughout all three novels: the timeframe. I mentioned this in my review of the first book, and had hoped the next two novels would help smooth out the issue. If anything, it’s become an even bigger hurdle.

This whole trilogy takes place in the YEAR before the events of the main Dune novel. Just one year. That’s it. Yet, all of the stuff that happens feels like it’s taking place over a significantly longer period of time. The story does little to root readers into a specific timeline. You never know if something has been taking place over days, hours, weeks, or months! It’s all pretty nebulous. The amount of story being covered, however, and the big events that go down (full on WARS happen) makes it feel like a huge chunk of time has gone past.

The Heir of Caladan ends with Leto being awarded the fiefdom over Arrakis. It’s a connection we all expected, as it leads directly into the original novel, but the way it’s executed makes no sense. Like…at all.

Without getting too deep into spoilers, the Baron Harkonnen ends up really pissing off the Emperor. To the point it’s impossible to see how we go from where this novel ends, to the Emperor and the Baron working together to bring down Leto. None of what plays out leads to that scenario happening, yet we’re left with the understanding there’s only a month or two (at most) before the events of Dune goes down.

Even more than that, the culmination of the story being so close in timeframe to the original novel kinda takes away from elements in that book. Part of what makes the first part of Dune so compelling is the idea that this is really Paul’s first big adventure. It’s implied he didn’t do much, and largely led a privileged (albeit adamantly trained) life without any major shake-ups until he was forced to move to Arrakis.

On the converse side of that, the Caladan Trilogy also sidesteps a couple things Dune explicitly mentions as happening in the past. In the original novel, a big reason why the Emperor wanted House Atreides gone was because they had managed to train part of their personal forces to be as effective as the dreaded Saudarkar forces. Like, it’s a big deal and mentioned a few times early on. Yet, here we have a hole trilogy set just a year before and there’s not a single mention of it, or indicator it’s something they’ve been working on…

Engaging, But Out of Place

Between all the stuff I’ve talked about, it makes the Caladan Trilogy as a whole feel very, very weird. It just doesn’t fit. Which is all the more frustrating considering it’s an enjoyable series of books if you look at them on their own. Take away all the ancillary stuff, divest it from the Dune series entirely, and there’s a lot to enjoy out of these three novels.

In that capacity, The Heir of Caladan works incredibly well as a trilogy closer. It brings just about all major threads together in a (largely) satisfactory way, and I can’t say I was ever bored while reading. In fact, it managed to keep me flipping the pages at a fairly good pace.

The problem, however, is it’s very hard to separate it from the rest of the series, and it’s intended to work alongside it all. In that way, it just doesn’t work and left me scratching my head more than once.

If you’ve been keeping up with this trilogy and enjoying the journey, I think you’ll have plenty to enjoy with The Heir of Caladan. Even as it seems to actively work against the rest of the Dune saga, it closes out the trilogy in a solid way. Sadly, if you haven’t been on board with these new books, there’s little here to change your mind, especially as the authors backslide into some previous bad habits.