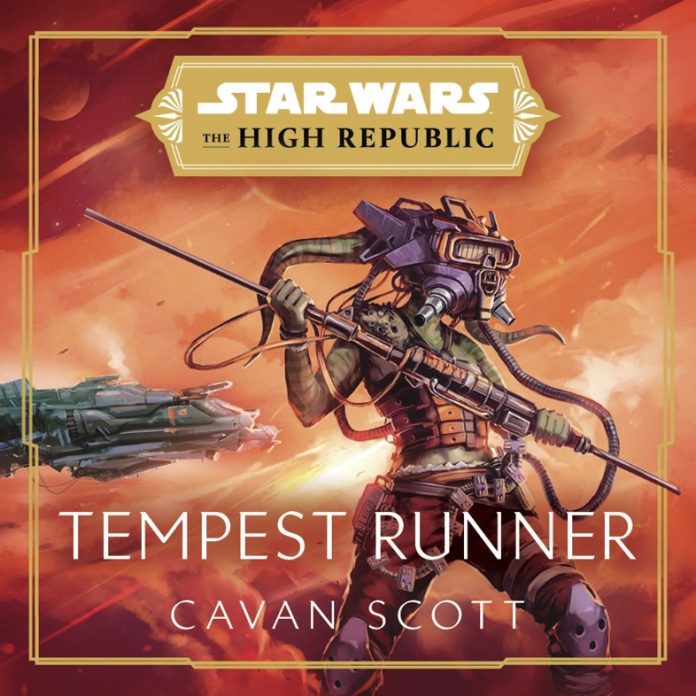 This week sees the release of a brand new Star Wars audio drama, this time set in the days of The High Republic offering a a fun, albeit confusing, adventure.

If you’re anxiously awaiting to see what happens next in The High Republic, but can’t wait until the next wave of books launch in January, then Tempest Runner is here to ease that wait. This marks the third Star Wars audio drama (Dooku: Jedi Lost, Doctor Aphra). If you haven’t listened to one of these before, it pretty much brings together a full voice cast and a soundtrack that feels like you’re in a movie.

It’s been an interesting experiment for new Star Wars stories, and having this new one set in The High Republic immediately made me want to give it a listen. By and large, we’re treated to another grandiose, blockbuster story, but I think it would have worked better as a book. Let’s talk a little bit more about it…

Here’s what I love most about Tempest Runner, it pretty much serves as the “next” chapter in the larger story of The High Republic. It picks up about three months after the events of the previous books (The Rising Storm and Out of the Shadows). The attack on The Republic Fair is still being dealt with, the Drengir have been defeated (covered in the comics), and the Republic/Jedi have put their might into tracking down/defeating the Nihil.

The Nihil aren’t fairing too well, and despite Marchion Ro’s plans, they’re definitely struggling. Even worse for Lourna Dee (a Tempest Runner who leads a large portion of the Nihil), the Republic now believes SHE is the “Eye of the Nihil” and have put all their efforts into taking her down.

In a failed attack against the Republic, Lourna Dee finds herself suddenly in the custody of Republic forces. She’s managed to keep her identity secret, for the time being, but as she begins to settle into her new life working on a prison ship, an old enemy comes back to make life miserable.

I don’t want to go too far into the story elements here to avoid spoilers, so I’m keeping it pretty generic. The story jumps goes back and forth between the “present” time period and detailing Lourna’s turbulent past. Through these, we see how she became the person she is, from escaping the slave pits, to bounty hunter work, and eventually her rise through the Nihil ranks.

I loved learning more about Lourna’s past; especially as she’s always been a character who’s stood out in The High Republic. Not only does it offer insight into her character (explaining some of the actions we see her take in the previous novels), but it also delves a bit more into the Nihil themselves. We get to see the previous Eye of the Nihil (Marchion’s father) deal with the Tempests, and how Lourna came to be one of them.

Personally, I think I enjoyed that aspect of the story more than the present day story being told. Don’t get me wrong, there are some really cool things to learn in that part of the story, especially when it comes to Lourna’s past catching up to her. Even so, something about it just felt…off to me.

Part of it has to do with the nature of it being a radio drama (which I’ll talk about more in a second), but a big factor was the pacing. There were a number of smaller plot points, even whole characters, which felt extraneous and added little to the overall story being told. Hell, some of them even wrapped themselves up within the same “section” they’re introduced.

Normally this wouldn’t be a big deal (again, I liked learning about her past), but it took a long time before the actual main story plot came into focus. By the time those things clicked into place and I thought to myself “ah, THIS is where it’s going” it was already in the final act and close to wrapping up.

It’s a hard complaint to make, mostly because even in “slow” sections where this is an issue, the action keeps you invested. By the time it ended, I found myself even more enamored with Lourna Dee (y’all know how much I love my Star Wars villains) and ready to get my eyeballs on the next books. Tempest Runner is still “good,” but these pacing issues make for an overall story that doesn’t reach the same highs the rest of The High Republic stories have managed to hit.

So let’s talk about the audio drama aspect of the story. For the most part, I’m not a huge fan of the format. Hell, I can’t even tell you the last time I listened to an audiobook, mostly because I’m partially deaf in one ear so they just don’t appeal to me as much. That said, I LOVED Doctor Aphra and had a blast listening to it, so it’s not like I’m opposed to these things out of hand.

One of the things I love most about The High Republic is how balls-to-the-wall they’re going with the story. It manages to bring the blockbuster action and scale of the movies to the novels, and it’s been pretty damn awesome. Tempest Runner doesn’t hold back either and keeps that same sense of scale and action…but the audio drama format just doesn’t work as well for it.

Mostly because the story throws out a whole bunch of character names, planets, and tech all throughout. Normally this isn’t a bad thing (it’s Star Wars), but unlike the previous audio dramas, there aren’t any familiar/returning characters and locations that serve as an anchor for fans. Being set in a totally new time period, everything coming at you is mostly new, so it feels easier than ever to miss a name during the quick dialog.

More so, the biggest issue I had with the audio element, is that SO MANY of the characters feel like they’re voiced by the same people. Seriously, telling the difference between the characters was pretty difficult at multiple points in the story, especially as it jumps back and forth through time periods with nothing to notate the shift. I was shocked when I looked back over the cast list to discover some of the characters were voiced by different actors.

So between fast talking characters (who frequently argue with one another) and so many of them sounding the same, I found myself having to frequently rewind/re-listen to sections of the story to clarify what was going on and catch what I may have missed. I was willing to chalk it up to the partial deafness I mentioned, but I’ve heard from a few other viewers they had similar issues.

It’s a frustrating issue to have and it managed to take me out of the story elements every time I had to do it. I found myself wishing I had a transcript of the script (which they normally release several months later) to read along with it at the same time. So yeah, while I love the level of production they bring to the audio dramas—sounding like I’m listening to a full scale Star Wars movie is pretty cool—I definitely feel like Tempest Runner would have worked better in another medium.

If you have been enjoying The High Republic, you’ll certainly enjoy listening to Tempest Runner. While I don’t think it hits the same level of storytelling as other High Republic stories, it offers cool insights to Lourna Dee and the Nihil, brings in fun cameos, and gives us a glimpse of what’s coming next. That said, the audio drama format really seems to have held this one back, making it more confusing to keep up with than necessary.